VADIM GLAZUNOV - CHILD OF THE YEAR 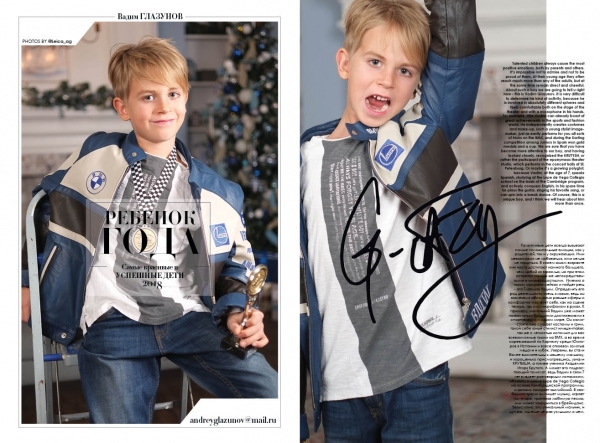 Talented children always cause the most positive emotions, both by parents and others. It’s impossible not to admire and not to be proud of them. At their young age they often reach much more than any of the adults, but at the same time remain direct and cheerful.
About such a boy we are going to tell u right now - this is Vadim Glazunov. It is very difficult to determine his kind of activity, because he is involved in absolutely different spheres and feels comfortable both on the stage of the theater and with a microphone in his hands. For example, little Vadim can already boast of great achievements in the sports and fashion world. He independently creates costumes and make-up, such a young stylist image-maker, just as easily performs for you all sorts of tricks on the BMX, and during the Karting competition among Juniors in Spain won gold medals and a cup. We are sure that you have become more attentive to our boy, and having looked closely, recognized the KRUTYSH, or rather the participant of the eponymous theater studio, which performs in the concert halls of St. Petersburg. Or maybe it’s a growing polyglot, because Vadim, at the age of 7, speaks Spanish, studying at the Lope de Vega Collegio school on the basis of the Cambridge program, and actively conquers English. In his spare time he plays the guitar, singing his favorite song, or can spin into a break dance. Of course, this is a unique boy, and I think we will hear about him more than once.

More in this category: « TATIANA PEDORCHENKO IN NEW MODNY DOM elizaveta chelnakova »
back to top