A VOICE IN MUSIC. OLGA DOLGOVA 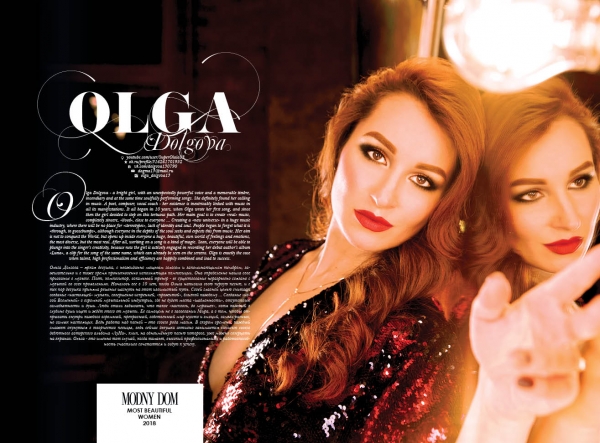 Olga Dolgova - a bright girl, with an unexpectedly powerful voice and a memorable timbre, incendiary and at the same time soulfully performing songs. She definitely found her calling in music. A poet, composer, vocal coach - her existence is inextricably linked with music in all its manifestations. It all began in 10 years, when Olga wrote her first song, and since then the girl decided to step on this tortuous path. Her main goal is to create «real» music, completely sincere, «lived», close to everyone ... Creating a «new universe» in a huge music industry, where there will be no place for «stereotypes», lack of identity and soul. People began to forget what it is «through, to goosebumps», although everyone in the depths of the soul seeks and expects this from music. Her aim is not to conquest the World, but opens up inside everyone a huge, beautiful, own world of feelings and emotions, the most diverse, but the most real. After all, working on a song is a kind of magic. Soon, everyone will be able to plunge into the singer’s creativity, because now the girl is actively engaged in recording her debut author’s album «Luna», a clip for the song of the same name, which can already be seen on the screens. Olga is exactly the case when talent, high professionalism and efficiency are happily combined and lead to success.

More in this category: « 5 KOZYREY SAPONENKO BRIGHT, AMBITSIOUS AND SMART. EVGENIA SHEVCHENKO »
back to top