STAR OF THE COVER OF THE MAGAZINE Katerina RODIONOVA 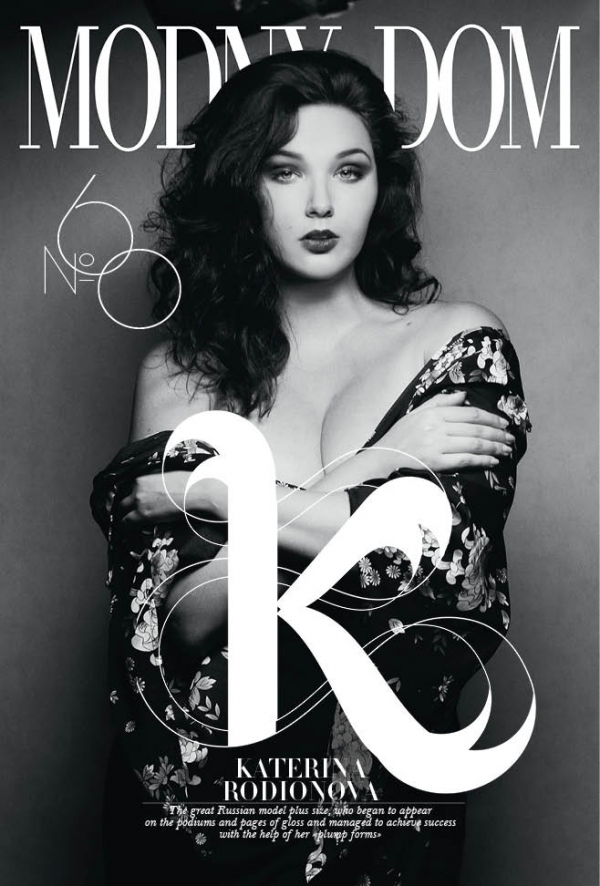 In our age, the main cult of which is the appearance, it would seem difficult to be different. Women tend to achieve ideal sizes, adhering to strict diets and exhausting training, accumulating a multitude of complexes and offenses. Is the secret of a successful and happy life really under the form of «90-60-90» or is it another stereotype imposed on us for decades? We asked Katerina Rodionova – the great Russian model plus size, who began to appear on the podiums and pages of gloss and managed to achieve success with the help of her «plump forms». 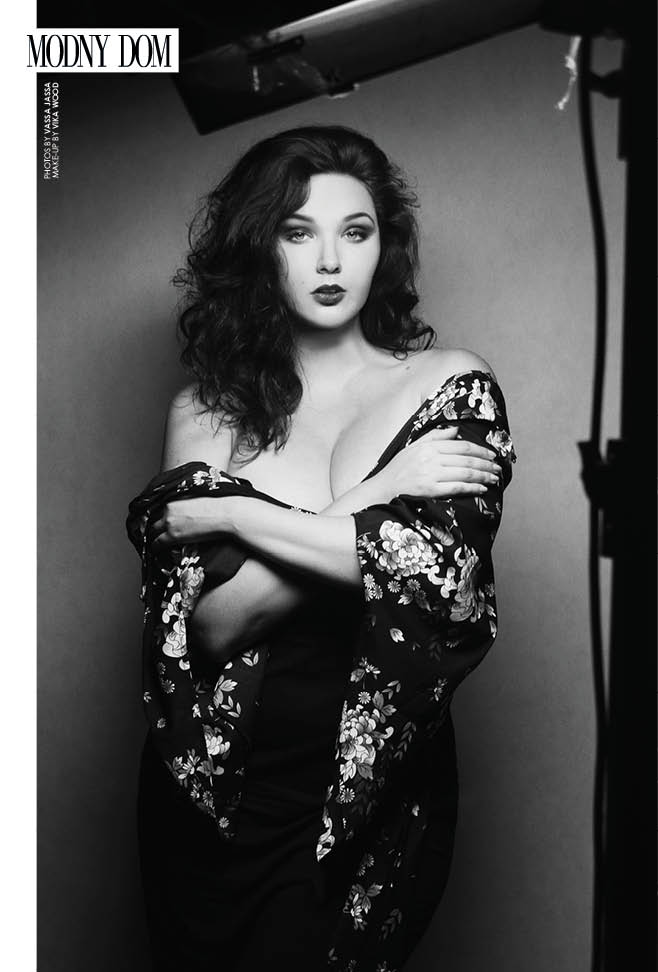 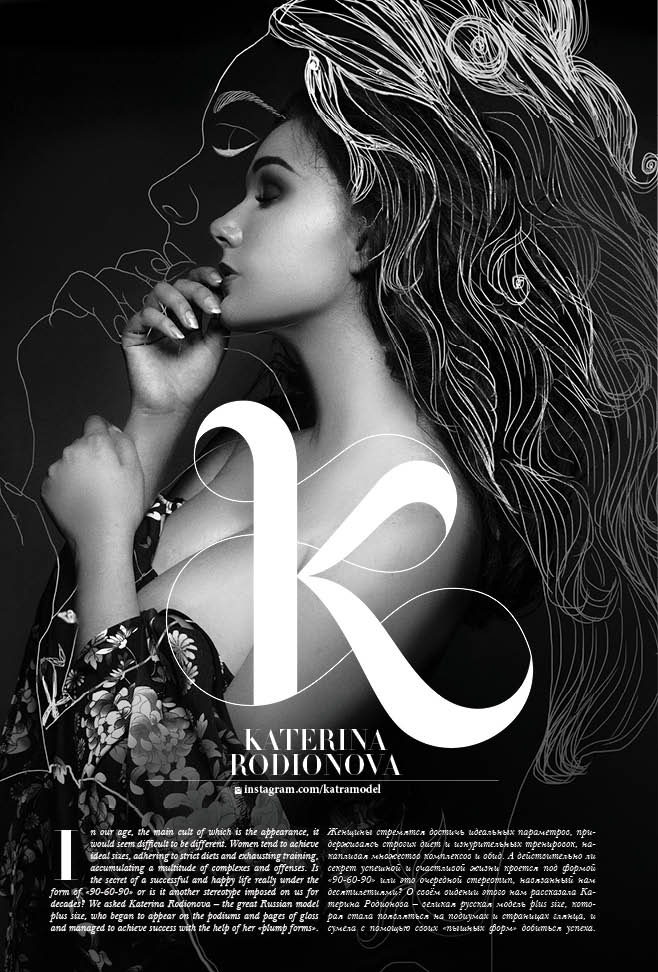 I was named after the empress. At the time of my mother’s pregnancy, the play «Catherine II» was staged in the theater, and it so happened that the name itself came into my life. Yes, I consider myself a strong person, because I did everything myself: I got a decent education, I travel, I do what I love, thanks to that, by the way, I recently bought an apartment without a mortgage; but I do not pretend to be a «strong woman of the century».

The modeling business is not the only kind of my activity, and due to the fact that I have been working since 13 years and have been living independently since 15, I had to work not only with welding to survive; for example, I started with the fact that I collected garbage in the streets of a small town near Moscow, and eventually became the face of the Italian brand of underwear, shine on podiums and covers. Through thorns to the stars, not otherwise.

Beauty is not the number of centimeters in the waist circumference. Beauty is a love for Yourself. To Yourself natural: with wrinkles, folds and stretch marks, with soft cheeks and round knees. This understanding of our feminine nature, respect for your body and awareness, it all begins with a love for Yourself.

To such projects, I can refer my first exit to the podium at the Spanish MANGO show in 2014. When you walk along the catwalk with the Canadian supermodel Coco Rosha - breathtaking. For 4 years I participated in many shows (including underwear) and filming for major brands, but I still remember the feeling of flight and ecstasy. 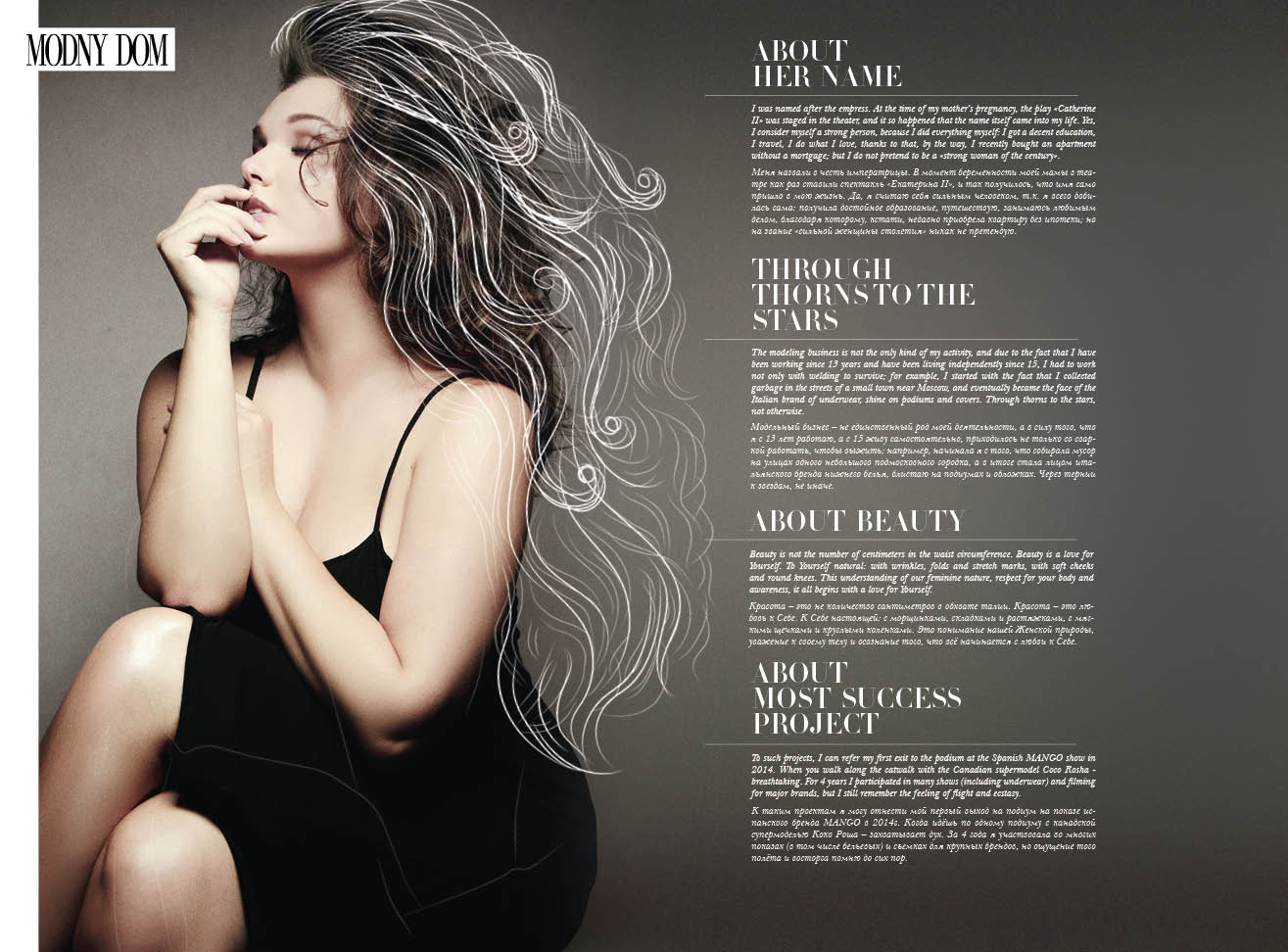 It all started with my ideal (according to doctors) weight of 66 kg with a growth of 177 and a pile of complexes: a small chest, wide shoulders, no waist, and eternal hormonal failures only added a headache. Having started treatment in one of the clinics in Moscow, I am prescribed hormonal pills, which for half a year from a lean girl turn me into a clumsy creature with 92 kg of viscera covered with skin. I stop taking pills. Endocrinologists, nutritionists, sports, fasting, diets - nothing helps and does not give any progress. Weight continued to grow, and the sport gave only a couple of cm in height (lifhak for low ladies). A total of 110 kg. The extreme point of my weight I will not say, because it was at that time that I, out of despair, literally, threw out the scales. Approximately at the same time, I finally turn to veganism and begin to love and listen to myself, Myself, and not the opinion of others. I threw out all the sports things, I bought a hoop and my first dress, so that there was at least some incentive to dazzle at least the waist! And as soon as I let go of the situation, I stopped exhausting myself with jogs and diets, from which only the head was spinning - the ice began to move. Proper nutrition, self-love and a heavy hoop per hour did their job, and I began to lose weight. Having dropped more than 30 kg for a year, which became an incredible victory for me, the weight rose. And it has been standing for several years. The metabolism killed by diets does not allow me to do anything, as if hinting - do not, you are so good! And I really love myself this - even 14 kg more than the «norm», but with wide hips, elastic booty, big chest and waist, which only emphasizes everything else. Yes, there are stretch marks on my body, yes, I have a tummy, a beautiful feminine tummy that not only I love very much. Yes, I have something to work on, but I like myself just like that, shuddering remembering the time when I was thin. And I go against stereotypes, not promoting gluttony, as a standard of beauty, I say that every woman is beautiful only when she loves herself, no matter what body it is.

I was married, but now I understand that at the moment it’s comfortable to be single. I build a career, I travel around the world and at last I Live. I do not want to think, let it be as it should be. I trust the universe.

Publications my works in the Italian VOGUE are another pride. I worked, sent photos, rejected them, but I shot again, sent again and ... and now, my work in VOGUE Italia. There is no secret: to work, work and once again work, even if it seems that it is not successful. As you know, no one is mistaken only who does nothing.

I wish them to believe in themselves and not to give up after the first refusal. To my regret, in Russia until now not all customers understand what it means to work with a model in a large amount. The girl comes to the casting, she is refused, she is upset, not even suspecting that in fact the customer himself does not really understand what he wants to see in the end. And if in general: do not expect a miracle, act! Put yourself in order, do tests and snaps, send out a portfolio to agencies that work with models plus size. The chance that you will see the scout of a major agency in the subway and rush to catch up on the escalator is negligible. Do not forget that the work of the model also begins with a love for Yourself - because if the model is constrained and afraid of the camera, then first of all it does not own its body and its emotions. Love yourself and be happy! 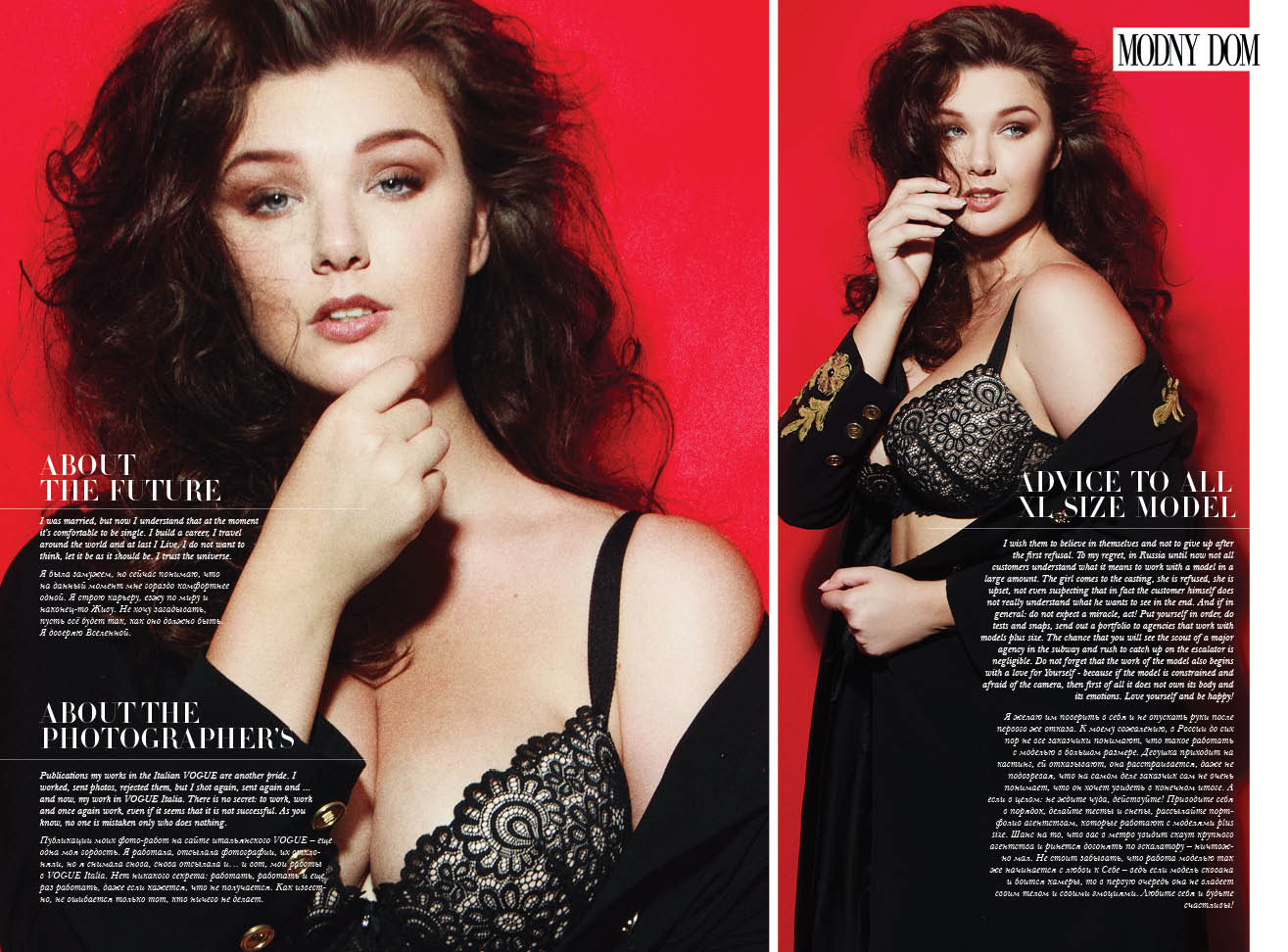