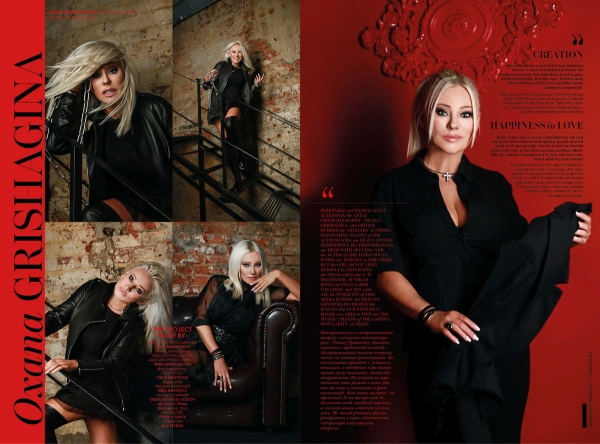 The project made by:

Inimitable and extravagant actress in the art of cinematography - Oxana Grishagina, who critics dubbed the «mystery actress». Fascinating talent of the actress will not leave anyone indifferent. Her performances are held with success, and the acting game turns souls inside out, forcing to empathize. But the girl did not limit herself by film roles, she sings and is also a TV presenter. After all, being on stage is her vocation! And yet, with all the publicity of this media person, her private life remains behind the scenes. But our editorial board was able to find out the mystic charms of the gaining popularity actress.

«My roles are the voice of the soul, therefore there is a mass of emotions between the audience and me. The main thing is not to play, but to live the role. Live the eyes. Emotion must be on the face of the actor and the viewer certainly considers it».

«Each of my roles is a real celebration for me and my team. This is mental and spiritual growth and it is worth a lot. But secretly I dream to see my favorite eyes in the hall, to find them among a million others. After all, women’s happiness is to love and be loved. That is what my soul needs».